Two years ago I was in Austria, my sister had flown to join me for a visit through Salzburg and Vienna. We share a love for the history of the country and were both really excited to get to learn more while walking the streets of this beautiful place. Thinking fondly back on this trip, I decided to make Austria the next country in the EU series.

Austria has an interesting history, and that extends to their past banknotes as well. At the 2017 FUN show my dad and I picked up these beautiful Austrian kronen – these kronen were issued for German-Austria, however with the dissolution of the Austro-Hungarian empire kronen eventually were replaced in 1925 with the schilling.

With the end of WWII the second issue of schillings were introduced to Austria and the schilling remained the currency of the country until 2002 when the euro became the official currency and Austria said goodbye to their schillings. 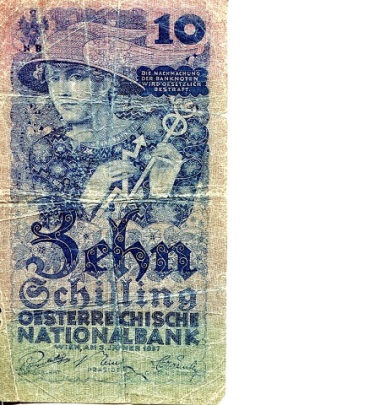 Looking through the collection of pre-euro banknotes we have on our website  I wanted to highlight the below notes, as I find them beautiful and interesting parts of Austrian history.

The 20 schilling note features Moritz Daffinger, a painter and sculpture. The back of the note has one of my favorite buildings from Vienna depicted, the Albertina. We learned that the name Albertina came from the founders, Maria Christina and Duke Albert Casimir blending their two names together. Fun fact, Maria Christina was the daughter of Francis I Holy Roman Empire and the fascinating Maria Theresa, it was said she was her mothers favorite child and the only one allowed to marry for love. The 50 schilling note below from 1986 features Sigmund Freud, who we were able to learn more about through our visit to his office and home while in Vienna. The building on the back of the note is of Vienna’s Josephinum Medical School.

I hope I am not getting too repetitive with this series, as it is clear through writing these blogs how it sadness me all these beautiful designs were taken out of circulation to introduce the euro. However, since the euro is the official currency of 19 countries I suppose we can preserve the history of these incredible banknotes as parts of our collections. I think that is why I love old European notes so much. Since they are no longer being produced they become a nostalgic piece of the past.