Belgium wasn’t originally on my list of countries to visit while in Europe, however as I happily learned, plans change. I met this lovely Flemish couple at a port tasting in Portugal. We had a lovely time together and traded contact information. They told me if I was ever in Belgium to let them know; so when I found myself in Amsterdam with a cheap ticket offered to Belgium, I bought it. Belgium found a place in my heart after my visit. My hosts made sure I was filled with great beer, Flemish stew, waffles and chocolate! I will always say that one of the happiest parts of traveling will be the people you meet.

I remember noticing a sense and appreciation of art and culture while there. From the graffiti in the streets of Antwerp to the chocolatier artists in Bruges; there is a desire to create and enjoy beauty. This observation returned while writing the new blog series (first one here) about pre-euro banknotes, which made Belgium the perfect country to start this series with.

I looked at the last banknotes issued by Belgium and researched the images that appeared on them. Unfortunately, despite the low exchange rate to the euro, these notes are relatively rare and can be expensive. While we have several lovely old Belgium notes available on the website, the only note in stock from the last series is the below 200 franc note. 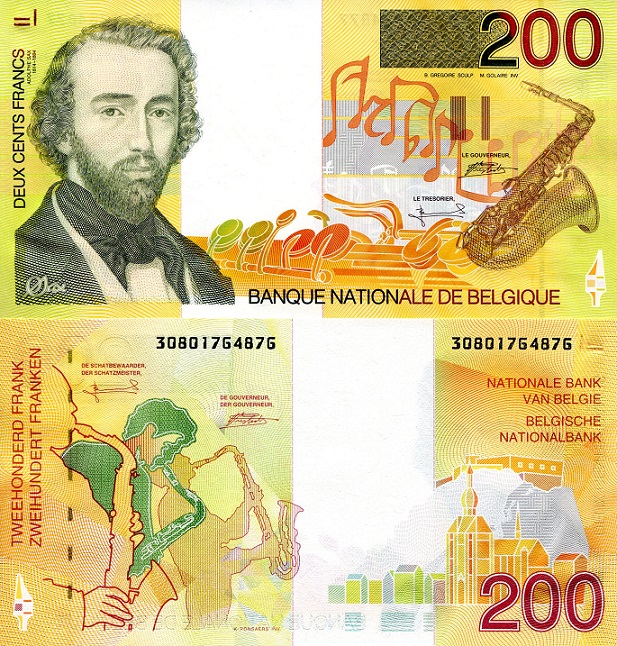 If you look at the 200 franc note you are instantly drawn to the bright yellow color and the funky design of the saxophone throughout the note.  It’s not difficult to suss out that the man portrayed on the note is the man who invented the saxophone, Adolphe Sax. However, Adolphe isn’t the only artist to appear in this banknote series. The first note in the series, the 100 francs, features the Belgian painter James Ensor. Belgian surrealist artist Rene’ Magritte appears on the 500 franc note with Constant Permeke, a painter and sculptor, appearing on the 1,000. Last, but not least, the 2,000 franc note depicts Belgian architect and designer Victor Horta. The only note in the series that doesn’t highlight some form of artist is the 10,00 Francs which depicts the former King Albert II and Queen Paola.

When I think about the above information, it should be clear how important the arts are to Belgium’s culture. Think about it, I could look at the paper note in my hands that would be used to purchase goods, and know immediately a value and identity of that county. What a power tool that is!!

In 1999 the idea of the euro was created, and as a founding member of the EU, in 2002 Belgium introduced the euro into circulation.

According to an article by Chas Early with BT News the euro was the largest single monetary changeover in history. Twelve countries agreed to adopting the new euro, “Established by the Maastricht Treaty in 1992, the euro had been in use as a non-cash currency (in banking transitions etc) since January 1, 1999. But January 1, 2002 was the day on which banknotes and coins were fed out across the continent. (C. Early)” This transition was seen as a success and within five days more than half of all cash transactions in these countries were made with the euro.

While deemed as a success within the EU, I can’t help but wonder how the citizens of Belgium felt about losing their francs. Possibly I dig too deeply into these notes, however I would understand the disappointment in having to replace their francs with the euro. I am curious to the thoughts of a citizen giving up their countries currency to use a collective system with other countries. I wish I’d asked the Flemish family while I was in Belgium about their experience with this transition and their thoughts. I suppose this is a discussion for another visit, over a tasty pint!

One thought on “Lost Banknotes of The EU part 2: Belgium and their Farewell to Francs”