With the release of a much anticipated banknote comes much excitement. Fiji has released a new 7 dollar note into circulation (I’m actually not sure of any other country that has this denomination banknote). A press release from April 2017 stated that work began in August 2016 to create a note to commemorate the Fiji Rugby 7s gold medal win at the 2016 Summer Olympics (XXXI) held in Rio de Janeiro, Brazil from 5 August to 21 August 2016. In addition to the banknote a 50-cent coin was also released in commemoration.

The press release states, “We are pleased that we are able to deliver to all Fijians a
high quality banknote and coin that would mean a lot to many Fijians and an inspiration to aspiring sportsmen and women as well as our children”.

The 7 dollar banknote has stirred a lot of chatter in the numismatic community and I can understand why. A note issued to honor their rugby teams gold medal win is such a new and exciting idea. Not only is the denomination and design of the note making headlines, but the representation of a communal victory for Fiji. I think it’s a beautiful release.

A blue note featuring the Fijian flag with Olympic captain Osea Kolinisau running with the ball in front. On the left of the note you see Olympic coach Ben Ryan sitting on Sigatoka Sand Dunes. On the back in English text “Fiji Rugby 7s Gold Olympians” with Prime Minister Josaia Voreqe Bainimarama and the team officials. Two million notes were printed by Oberthur Fiduciaire.

However, as beautiful as this note is I wonder how many more sport themed notes that may be released in the future. Sports on banknotes isn’t an all together new idea. The 2006 Canadian 5 dollar note was issued depicting a game of hockey, Samoa issued their popular 10 tala note in 2008 to celebrate their Samoan rugby team win in the 2007 Hong Kong Sevens. Scotland issued a note in 2005 celebrating golfer Jack Nicklaus. 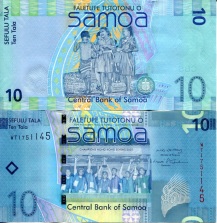 There is word that the new 5 Rufiyaa note from Maldives will feature a soccer player. You can check out the new design and security features for the Maldives note.

So, what are your thoughts on this new banknote and piece of history immortalizing this gold medal victory for Fiji!?