This is part two of our Notgeld blog. For part one: Click here

If you remember where we left of, these German Notgelds were being picked up for collections all over, and thus creating the first currency collection craze: These post WWI Notgelds were issued in hopes that they would never be redeemed. Cities and towns wanted to make them as attractive to collectors, so they would never end up in circulation. To guarantee these notes wouldn’t be redeemed they were issued with expiration dates on them. This meant that the note would soon expire after the issuing date and limit the amount of people who could redeem the note in time. Therefore insuring these cities and towns wouldn’t have to actually financially “back” the currency.

Unfortunately by 1922 the collection craze started to wind down. Perhaps there became too many Notgelds, or they were too easy to get, whatever the reason these notes lost traction in the collecting world. This correlated with Germany’s ever growing inflation and post WWI debts. Therefore in 1922 Notgelds were being issued in higher denominations and returned back to being plainer notes used out of actual necessity. You should be able to find Notgelds from 1920-21 in pretty good condition (aUNC-XF) since they were mostly released to not be circulated. However 1922 Notgelds are usually more worn (from actual circulation) and it is very common they will have hole punches or stamps in them to signify cancellation (and therefore showing they were at some point redeemed).

By 1923 Germany reached the final year for Notgeld (that I’ll be talking about they do reappear around the WWII era). In the beginning of 1923, inflation was growing and Notgelds were being issued in denominations of hundreds and thousands and by the end of the year, in the trillions. In Dusseldorf the highest Notgeld note was issued: 100 Trillion Mark . With the inflation growing and Germany already in a time of political and economic chaos this resulted in riots as well as people stealing printing presses to print their own high denomination Notgelds.

At the end of 1923 in a last effort to control the inflation and emergency issued Notgelds the issuing of “new” Notgelds took place. These Notgelds were no longer issued in Marks; but now the denomination was noted in “Gold Mark”. What this meant is the new “Gold Mark” would be backed with a stable value. By adding “gold” to the marks the cities and towns were promising the value of the Notgeld would hold it’s value. To show (and promise) the value of the new “Gold Mark” the notes were also converted in American dollars (since at this time the US dollar was still backed by the gold standard– hence calling the denomination Gold Mark). As well as backing these new Notgelds with actual American dollars they also issued Notgelds backed by food, or anything thing else that would give a stable value to the currency.

However by 1924 the German government in efforts to stop the issuing of Notgeld made it illegal for any city, town, company or person to print or issue their own money. This of course ended the German Notgeld as they knew it. Almost 100 years later these amazing pieces of history are still floating around collections today. We are so proud to have a selection of Notgelds and as mentioned will be adding to it over time. Most of the Notgelds we have are in good condition and hold stories of their very own. If you have any questions on Notgelds or what notes we have to offer just leave us a comment. Unfortunately the Notgelds we do have are mostly “one-off” notes, therefore are limited and once sold out won’t return. However, an amazing area to focus a collection on and a fascinating historical look into a countries response to a detrimental economic time period.

Side Note: In German currency you may see the denomination 10 billion – this actually means the notes value is 10 trillion. The German word for “trillion” is “billion”. On the other side billion in German is Milliard. (I know its a bit confusing: here is a picture of English-German translation to maybe clear up.) 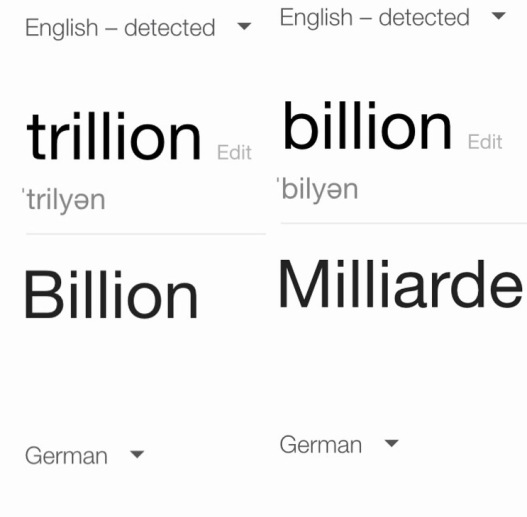 One thought on “Got Notgeld? How small notes created big excitement: Part Two.”