What do you get when you take a banknote artist and engraver who have over 63 years of experience with De La Rue, England’s  premier banknote and security printers since 1860? You get this beautiful and amazing banknote.

This note was a sample from De La Rue and sadly for the banknote world it was not accepted, although collectors of Sri Lanka and Ceylon notes will be familiar with its depictions.

We are pleased to announce that this dynamic duo, Tom Branton and Mick Wilson, have decided to continue their partnership in their retirement and have formed a fun/art note company. Collectors will have an opportunity to buy these and many other fun note designs to be released in the future.

As a long time of fan of the banknotes from De La Rue, you can imagine how excited I was to discover this rejected note and to learn from Tom and Mick that more of their creations will be available in the near future.

I have also enclosed their impressive bios for your information, but if you ask me, the beauty of this note is all you need to know.

Tom Branton is an award winning graphic artist who for the past 30 years has been at the forefront of banknote design until he retired from De La Rue in 2011. His long career has seen Tom master and keep abreast of all major developments in banknote design, starting with hand crafted methods and moving on to incorporate the computer aided design of today. He has designed banknotes for such countries as Cuba, Oman, Gibraltar, Malawi, Uruguay, Clydesdale Bank, RBS, notably the Jack Nicklaus £5 and the RBS R&A £5. And was awarded the International Banknote Society gold medal for Banknote of the Year 2009 for his Samoa 20 Tala (2008 series), and has been nominated a further four times. 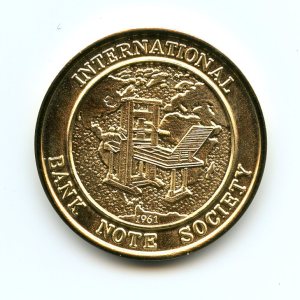 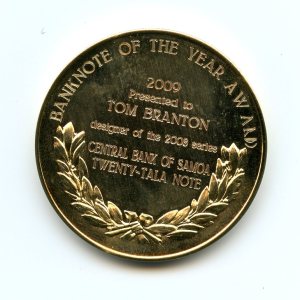 As you might expect Tom draws, paints and illustrates, something he has enjoyed for many years. Quite a number of his works have gone to limited editions and hang in many golf clubs including The Belfry, Royal North Devon, St. Andrews G.C. And the home of Peter Alliss.

Mick Wilson has 37 years of working in banknote origination and construction, Mick has extensive knowledge in the art of banknote production. He has worked on over 200 banknote designs for more than 30 countries, including 6 international award winning designs for the RBS, Clydesdale Bank, and the Central banks of Uganda, Samoa, Bermuda and Hong Kong. His artwork has been included within banknotes nominated for the IBNS awards for South Sudan, Bank of England, Central Bank of Kazakhstan, the Cayman Islands and Sri Lanka designs. His experience includes steel die engraver and etcher, black & white artist, litho/offset artist, intaglio artist and computer graphic artist.

Mick is a member of the Society of Graphic Fine Art with one of his works being given an award in 2011. His works are extremely well researched and detailed and can be taken down to various sizes for Intaglio prints of fine quality.
* Just FYI Thomas De La Rue who founded the company actually started by printing playing cards in 1831)